We are gonna build our reptile house in a tub with a pool, shelter, food/water station, sun bathing place (for the lizard we’ll put fake tree branches in there for him to climb and sleep and for the turtle we can build a balcony. Here’s some info about bearded dragons. They are medium sized lizards. The bearded dragon’s head is triangular shaped and contains rows of spikes that resemble thorns. Beneath their head the bearded dragon will have rows of spiked which when puffed up resembles a beard. These scales can also change colors, turning darker. The bearded dragon has well-muscled flat bodies with a row of spikes that runs down each side of the body. Their tail is generally half the length of their body, and unlike other lizards will not fall off and regenerate when threatened. Now turtles, The Eastern Box Turtle is the most well-known turtle in Virginia. They are easily found by their bright spots. Box Turtles have a dome-shaped shell. They are usually dark brown or olive-colored with bright orange or yellow patterns. The male will usually have red eyes and the female will have yellow/ brown eyes. They can grow up to eight inches long.  We know when we are gonna bring the animals together and we know whos bringing what and when. we have a hypothesis about what it will look like and when it will be done. we hope to have it done a week early and it will look like a animal mansion. 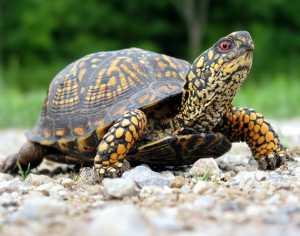